This is my stop during the blog tour for Black Dawn by Mallory McCartney. This blog tour is organized by Lola’s Blog Tours. The blog tour runs from 1 till 21 May. View the tour schedule here. 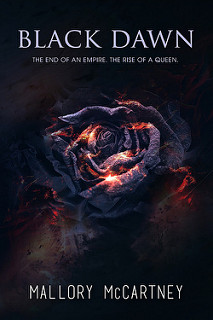 Blurb:
The end of an Empire, the rise of a Queen

Emory Fae enjoys leading a quiet, normal life. That is until two mysterious, and handsome soldiers show up at her apartment, and the life she knew is instantly whisked away. Memphis Carter and Brokk Foster come from the magical and war ridden world of Kiero, and upon Emory’s arrival she will discover she is the long-lost heir to the Royal Line and is thrown into the Black Dawn Rebellion with a dynamic role to ignite the rebels and reclaim her throne.

With both men being darkly woven in her past Emory uncovers hidden secrets, a power held long dormant, and will soon realize there are worse things than supernatural humans, love, loss, betrayal, and a Mad King.

Some things are better left in the shadows.

You can find Black Dawn on Goodreads

Excerpt:
Sweat rolled thickly down his neck, making his getup suffocating. The night was bleak and all-consuming as Brokk Foster looked to where he knew his best friend and Commander was hidden. Weeks of tactical planning and training had brought the soldiers of Black Dawn to this moment. The slight tremor in his hands was the only sign of how he was feeling. Brokk pressed himself closer to the mossy ground, breathing in the sweet smell of dewy grass. A snap of twigs and the group went rigid, frozen in the shadows. Laughter filled the forest air as four men with blood-red sashes of the guards draped brazenly across their chests walked into view a few hundred yards away. They quipped at each other, totally relaxed, their voices sounding like a constant buzz to Brokk. His blood thrummed in his ears as his heart pounded wildly. The seconds felt like centuries until finally, he saw a flash of silver and a smooth voice filled his mind, “Now.”
Brokk didn’t need to be told twice. Springing from the ground like a demon from the darkness, he pulled his curved twin blades out in seconds as he cut the men off. The group stopped, looking pale in the moonlight and extremely exposed.
“Evening, boys,” Brokk said in a taunting voice. “Sorry to interrupt your rounds, but I dare say you’re a little close for comfort to our home. Convenient for us, though,” he added, twirling the hilts in his hands. “We wanted you exactly here.”
Their leader took a daring step toward him. His mistake. Brokk yelled into the darkness, “Memphis, keep him alive!”
In a flurry of movement, his friends dropped from the surrounding trees, all dressed in the same camouflage, their weapons at the ready. A mad cackle broke the guard’s momentary trance, and they tried to run. Chaos ensued.
Brokk threw his blades at the nearest tree—a satisfying thud sounded as they found their mark. He ran, eyes fixated on the two guards that had broken away from the fight ahead of him. It was laughable really, just how much they thought they had a chance of escaping. They had no idea who they were up against.
The familiar popping and breaking of bones shivered through his body when animal instinct took over as the wolf inside him did. The ground shook from his colossal paws, golden fur rippling like a beacon in the night. His growl rumbled like thunder, and for a split second, he forgot who he was. All that mattered was that he took his targets down. The guard’s deaths were much swifter than they deserved.
Brokk shifted back, trying to calm the elation of how good that had felt. Memphis snapped him out of his glorified moment. “Brokk! Come here.”
The last guard was openly crying, now forced to his knees, hands shaking behind his head. Brokk almost felt sorry for him. Almost.
Up close he was much younger than Brokk thought, fear replacing the guard’s bravery now. Memphis’s icy blue eyes cut into his, and he didn’t have to say anything for Brokk to understand. Telekinetic or not, his friend wore his heart on his sleeve. They were all on edge and who could blame them? Six years of hiding. Six years of losing this war. Brokk swallowed back his thoughts, wearing his mask of oozing confidence and anger.
“W-who are you?” The guard’s voice squeaked out several octaves higher than it should have.
Nyx kicked him in the gut, making him wheeze in pain and gasp for air. Memphis crouched down in front of him, his long blond hair tied back, revealing his severe features. They all bore scars, some more visible than others.

About the Author:
Mallory McCartney currently lives in London, Ontario with her husband and their two dachshunds Link and Lola. Black Dawn is her debut novel, the first in a series. When she isn’t working on her next novel or reading, she can be found dog grooming, book shopping and hiking. Other favorite pastimes involve reorganizing perpetually overflowing bookshelves and seeking out new coffee and dessert shops.