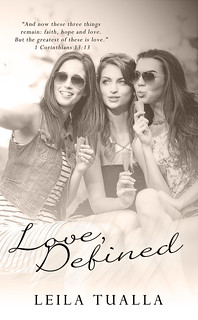 In their final summer before graduating college, three childhood friends expect an uncomplicated transition to adulthood…but learn they all still have some growing up to do.

Alex Makapulo is facing a crisis of faith.
Raised a Catholic, Alex is considering becoming a member of her best friend Jack Page’s church—against her family’s wishes—but she can’t quite take the final step of baptism. Jack loves Alex and doesn’t understand her hesitation, and Alex wonders if Jack’s love is a blessing or a distraction to test her religious conviction.

Lori Hanson embarks on the trip of a lifetime.
For her twenty-second birthday, Lori’s grandfather presents her with a summer vacation in England. While preparing for her adventure, she meets British musician Colin Watson online and quickly falls for him. They plan to hook up when she lands in London, but her grandfather forbids it. Due to complicated family dynamics, Lori must regretfully comply with his wishes, though she vows never to forgive him.

Andy Taylor is looking for love in all the wrong places.
When Andy runs into an old crush, she decides she wants a more meaningful relationship with sexy Miles Webber. But when she confides in Alex, her friend warns her Miles only wants her for sex. Andy becomes angry and devises a reckless plan to distract Alex’s attention from her relationship. Things don’t go quite as she expected, though, and Andy is left facing a crushing moral dilemma.

As the summer unfolds, three young women learn love and faith go hand in hand, not everything is black and white, and sometimes in a fast-paced world you have to slow down, breathe a little, and find your own definition of love.

Alex Excerpt:
“Do you think no matter what we do, we are still forgiven?” Somewhere between Francesca Battistelli’s He Knows My Name and Casting Crown’s I Will Praise You In The Storm, Andy finally spoke. “I mean.” Andy stopped.
The last song had reached its thunderous ascent and rolled towards the finish. Alex had barely heard her and for a second, thought that perhaps she had imagined it. Almond shaped brown eyes locked briefly in the mirror with a pair of big blue eyes and Alex waited, expecting Andy to go on.
She didn’t. Instead, Andy broke eye contact and turned her head to face the window.
“Yes.” She finally replied. Andy jerked up, and the two caught each other’s gaze again before Alex had to look back at the road again, frowning. “We can be forgiven as long as we ask for forgiveness, and repent and promise not to do it again.”
Another song began and once again replaced the gap of silence. Alex turned her head this time to see Andy’s eyes closed, headphones on, effectively dismissing her. She sighed out loud and set her sights on the horizon.
Lord, I pray this won’t be the last time she asks about forgiveness.
Skyscrapers of oil and energy giants glistened as they neared downtown Houston. After some guidance with the GPS, her car pulled up into the tightly spaced parking lot of the Women’s Clinic. The brick building was among other non-descript buildings that they could have easily passed by. A lot better than a little backroom, Alex surmised.
“How did you find this place?” Lori asked reluctantly. Alex got out of the Volkswagen and immediately wanted to retreat back inside. The thought of what took place inside started to make her stomach churn. Despite the blaring sun and Texas humidity, she shuddered.
“The internet.” Andy mumbled the answer as she was getting out of the car.
The three of them stood in the parking lot, in a small circle, looking at their surroundings, the traffic behind them, and nervously at each other.
Alex fixed her eyes on Andy. She wanted to say that ‘You have to forgive yourself and then ask for forgiveness.’ But her lips couldn’t form the words. She had three hours on the drive to craft the perfect words to get through to Andy and yet, here they all were, under the Texas heat, in the middle of a parking lot, shivering with nerves and barely registering each other.
After a brief period of silence, Alex cleared her throat. “Andy, you can still change your mind.”
“I know.” Came the softest reply.
Alex’s jaw tightened, and she looked at her feet to hide her feelings once more. Again, her brain tried to tell her lips to formulate the words it wanted and she looked up to open her mouth again and frowned when no words would come. Again.
This time, Alex searched her friend’s beautiful face and prayed that somewhere in those blue eyes, she could find the one thing for her to go ‘Aha! You’re just as scared as I am. You’re just as doubtful about this thing. Let’s get out of here.’ Her heart sank when instead of those things she hoped to find in her friend’s eyes, she found a quiet and settled determination.
She swallowed the defeat, shoulders hunched down and felt there was only one more thing left to say. “You are loved, Andrea Grace Taylor, remember that. Find your courage.”
Andy just nodded with the faintest smile on her lips
“Okay, you guys.” Alex said trying to keep her voice light and tried to respond to Andy’s smile. It wasn’t working. “I’ll be at the Barnes & Noble we saw on the way here. Call me when you’re done.” She was heading for the car, when she turned around and added, “Call me if you change your mind.”
A few minutes later, she maneuvered in and out of traffic, half concentrating on finding the bookstore. The other remained back at the parking lot of the clinic. A bright green Scion cut in front of her with a slew of bumper stickers. Coexist and Got Jesus, but Alex fixed on the yellow sign with black letters that read “Headed in the wrong direction? God allows for U-Turns.” Andy. Dear God, am I doing the right thing?

About the Author:
Leila Tualla is a Christian blogger and writer. She blogs at www.tuallaleila.blogspot.com and writes about her misadventures in faith, in motherhood, and whatever else inspires her. She holds a membership to the American Christian Fiction Writer. Her current project is a YA Christian Romance.