Blurb:
Joanna Halloran, a best selling writer and astrologer, lives in a beach house overlooking the Atlantic Ocean. After a violent storm, she roams the beach, glances seaward and spots a man clinging to a piece of wreckage, being tossed helplessly. She dives in and pulls him safely. Robert Zachary Harrison is from a wealthy, political family. As he slowly recovers from a private plane crash, he and Joanna fall in love and spend passionate and secluded weeks together. But because of family duty, Robert departs, not knowing Joanna is pregnant.

Twenty five years later, Senator Robert Harrison is running for President of the United States. In the midst of a contentious presidential campaign, Joanna’s daughter, who has a passion to expose secrets, seeks revenge on her father she has never met.

She meets and falls in love with her father’s adopted son. As secrets emerge, Joanna and Robert meet again and confront the past and present. Robert confesses a secret that Joanna had never known. Now, on the world stage, they struggle to keep their families and careers from destruction.

My Review:
he Other Side of Summer is a decent read and it will appeal to those who enjoy contemporary women’s fiction.

I really enjoyed the writing style and it’s clear from the high-quality prose and very professional editing and formatting that the authors know what they are doing. The words flowed easily on the page and the descriptive text was beautiful. Pacing was good and it kept me engaged from start to finish.

I completely fell in love with Joanna’s beach house – please can I live there? I could vividly picture it in my minds eye and it truly was a little piece of heaven on Earth.

This story is told in three different parts. One the one hand I liked how it was structured, but it did hamper my ability to really connect with the characters on an emotional level. Apart from Joanna and Robert, we don’t see enough of the other characters to form a bond. I felt the book could have been a bit longer and allowed the reader more opportunity to get to know the characters and observe more character development.

My favorite part of the book was the first part. While Joanna and Robert fall for each other straight away, I felt it, believed in it, and was totally caught up in the whole tragic nature of their love. It’s clear from the book description that it’s not going to be a happy-ever-after type scenario so I knew heartache was just around the corner.

Robert was afraid of turning into his father but unfortunately that’s exactly what happened. I hated how he treated Maya and by the end of the book I was really quite disgusted with him.

Joanna lost some points too as the story progressed. Maya clearly needed her to stand up for her, to fight the wealthy, powerful Harrison family to acknowledge her, but Joanna did the complete opposite. As a woman and a mother Joanna’s treatment of her daughter appalled me.

Matt is a sweetheart and while I was rooting for him and Maya, it all happened way too fast. It would have been more believable if their romance had stretched out for a month or two before becoming serious and before it came out in the open.

Overall though, this was a decent read; largely due to the excellent writing and interesting storyline. With a little bit of fleshing out I think this could be a very accomplished piece of work.

I received an advance copy of this book via Lola’s Blog Tours in exchange for my honest review. Many thanks to the author for the opportunity to read and review their work. 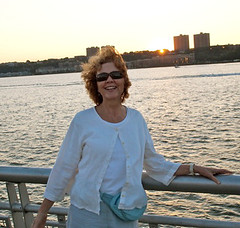 About the Author:
Elyse Douglas is the pen name for the married writing team Elyse Parmentier and Douglas Pennington. Elyse grew up near the sea, roaming the beaches, reading and writing stories and poetry, receiving a degree in English Literature. She has enjoyed careers as an English teacher, an actress and a speech-language pathologist. Douglas has been a musician, a graphic designer and an equity trader.